TikTok’s failure to implement its own content policy after the Russian invasion of Ukraine led to pro-war content dominating in Russia for the first month of the war, finds digital rights group Tracking Exposed in a new report released today: Tracking Exposed Special Report: Content Restrictions on TikTok in Russia following the Ukrainian War.

The explosion of pro-war content on TikTok is especially notable because on March 6 TikTok announced it had banned new uploads. This led the researchers to question how new content could appear on the platform at all. 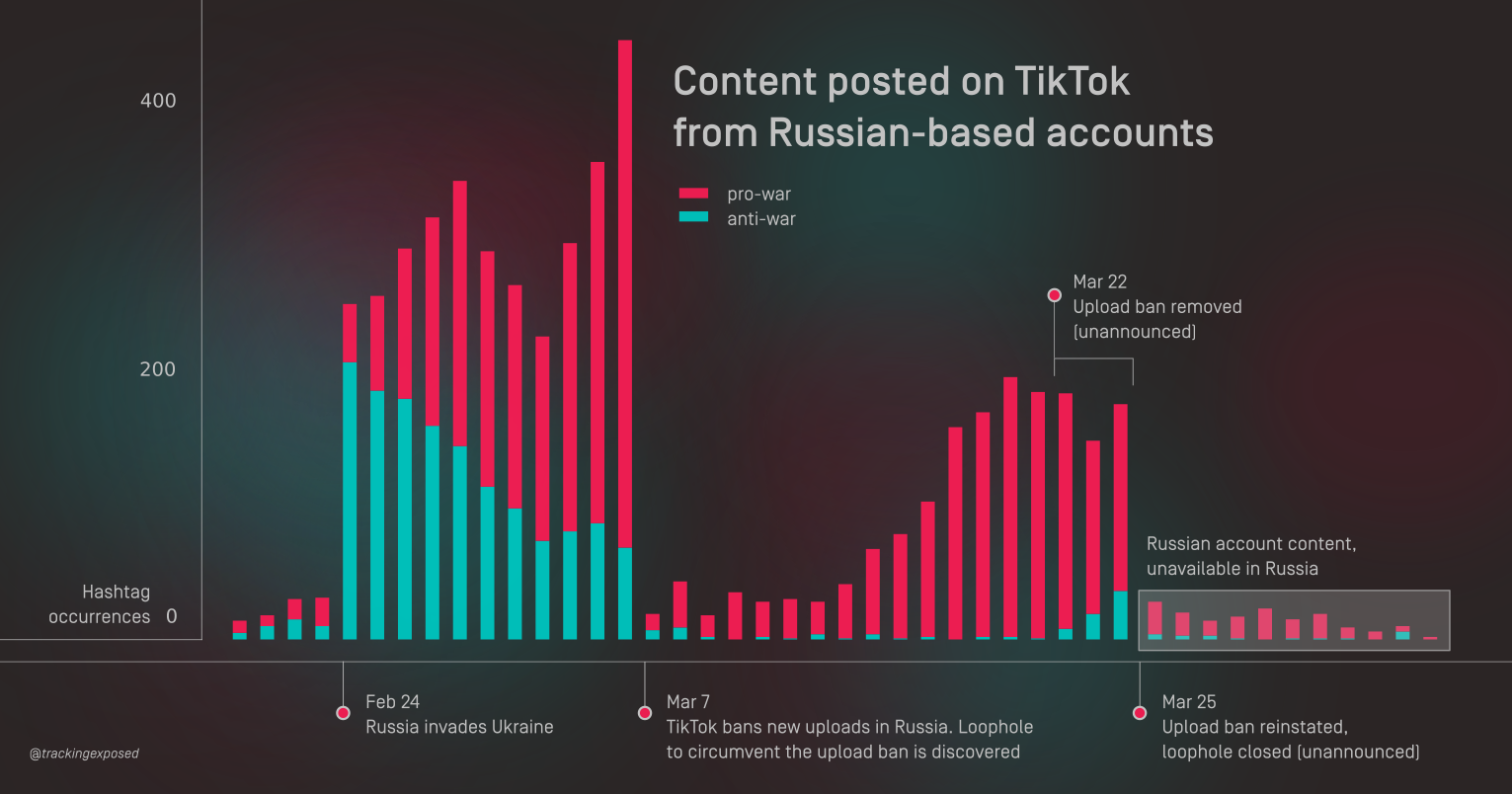 Content posted from Russian-based TikTok accounts, on a sample of pro-war and anti-war hashtags, from February 20 to April 5, 2022

Tracking Exposed found the ban had not been implemented properly, and that this failure led to pro-war content outnumbering anti-war content on TikTok. After the ban, there was ten times more pro-war content posted for each anti-war video, compared to before the ban.

Tracking Exposed’s report details two methods to post content despite the supposed ban: a loophole, and a moment in time where the ban was removed on the web version of TikTok (without announcement), so anyone could upload content again without restriction.

Between March 7 and March 24 content could still be uploaded in Russia thanks to the poor implementation of the upload ban, but pro-war content dominated until March 25 when Tracking Exposed’s research observed that the ban was finally implemented properly.

TikTok is frozen in time

Tracking Exposed’s research confirms that as of March 25 new uploads in Russia are not possible, and content from outside Russia is banned. Therefore, the only information about the Ukraine-Russia war available on TikTok in Russia is the content that was uploaded before March 25, which is now dominated by pro-war content and propaganda. TikTok originally announced the ban on new uploads to protect Russian users from the “fake news” law. The law makes it an offense punishable by a maximum of 15 years in jail to post anything false about the Russian army in Ukraine.

“Since the war began, TikTok’s policies in Russia have been opaque and inconsistent. In particular, the platform’s failure to properly implement the upload ban they had announced was exploited to flood the platform with pro-war narratives. Meanwhile, critics of the invasion have disappeared. Now, Russians are left with a frozen TikTok, dominated by pro-war content. There will be no Russian Spring on TikTok."

The full report, Tracking Exposed Special Report: Content Restrictions on TikTok in Russia following the Ukrainian War, contains detailed results and methodology, in addition to further quotes from the authors, images and linked sources. The dataset, as well as a Jupyter notebook to render the graph is available here: https://github.com/tracking-exposed/experiments-data/tree/master/tiktok-russia

Tracking Exposed’s infrastructure and methodologies have been validated in several peer-reviewed publications, and the works of the team have received coverage in major media outlets. Some of its reports have been cited in a United Nations report, a house testimony and a US Congress official letter to YouTube’s CEO.

Tracking Exposed is also developing YouChoose.ai, an alternative recommendation system for YouTube which empowers users and content creators. Tracking Exposed was born in Italy and its legal nonprofit is registered in France. The organization is funded through various grants and foundations, including from the NGI Ledger, the Mozilla Foundation and Reset.tech.