Algorithm investigation experts Tracking Exposed have exclusively uncovered that TikTok has blocked an estimated 95% of content previously available to its 55 million users in Russia.

The content is restricted at the application layer rather than the transport layer, which requires the direct involvement of TikTok. It is the first time a global social media platform has restricted access to content at this scale. TikTok users in Russia can no longer see content on accounts run by foreign media such as the BBC, or from Tiktok’s biggest stars including Charlie d’Amelio. When a user in Russia tries to access the accounts or posts from their favorite TikTokers based outside Russia they are met with an empty account (see next page for an image).

TikTok had announced that it would not allow new content uploads in response to the Russian law that made spreading “fake news” about the Russian army a crime punishable by 15 years in prison, but TikTok did not announce that it has banned all foreign accounts for users in Russia.

Tracking Exposed’s data - part of a detailed report into TikTok’s activities in Russia released today - also reveals that a loophole to get around the upload ban is being exploited by a coordinated network of accounts posting pro-war propaganda. 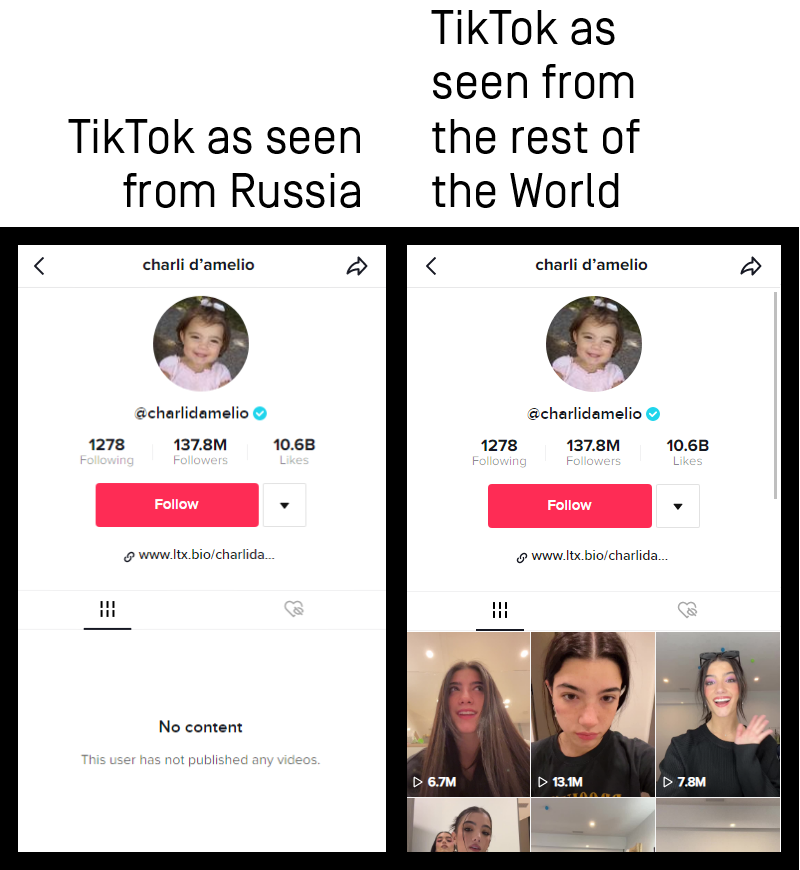 The account of TikTok’s most-followed user, Charlie D’Amelio as seen from Russia and the rest of the world using Tracking Exposed’s tools on March 15

TikTok’s move is notable because it significantly advances the “splinternet” - a term used to describe the fragmentation of the internet as a result of censorship. This time, it is not Russian ISPs who are banning content (as they did with Facebook and Twitter) but TikTok that is implementing the restriction.

At the time of release TikTok had not clarified why this is happening.

Tracking Exposed’s infrastructure and methodologies have been validated in several peer-reviewed publications, and the works of the team have received coverage in major media outlets. Some of its reports have been cited in a United Nations report, a house testimony and a US Congress official letter to YouTube’s CEO.

Tracking Exposed is also developing YouChoose.ai, an alternative recommendation system for YouTube which empowers users and content creators. Tracking Exposed was born in Italy and its legal nonprofit is registered in France. The organization is funded through various grants and foundations, including from the NGI Ledger, the Mozilla Foundation and Reset.tech.